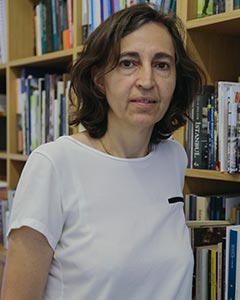 She was one of the coordinators of a major project on the cultural economy of Istanbul, commissioned by the the Istanbul 2010 European Capital of Culture Agency. She was the Istanbul curator of the 5th International Architecture Biennale Rotterdam, Making City, 2012, and she participated in Istanbul’s first Design Biennale in 2012 with a project on informal housing culture in Istanbul. Professor Aksoy has undertaken studies on cultural development and cultural heritage management planning for municipalities and public authorities. The study carried out for Eyüp Municipality completed in 2015 is an example, where the main aim was to develop an area management plan for the historic heritage site of Eyüp. She has also carried out international projects, such as the project titled “Access to Art and Culture: A Comparative Analysis in Europe and Policy Recommendations” funded by the EU Culture 2007-2013 programme.

She has publications in the areas of transnational media, migration and cultural identity, on the cultural and policy aspects of urban change and transformation of Istanbul, and on cultural policy issues in Turkey.

The following are some of her publications in English language:

• with Kevin Robins, Aksoy (2015) Transnationalism, Migration and the Challenge to Europe, London: Routledge.

• Aksoy (2011), ‘The Violence of Change’, in Living in the Endless City, edited by Ricky Burdett and Deyan Sudjic, London: Phaidon.