How a Chef Choice can Change the Microeconomy of the Territories 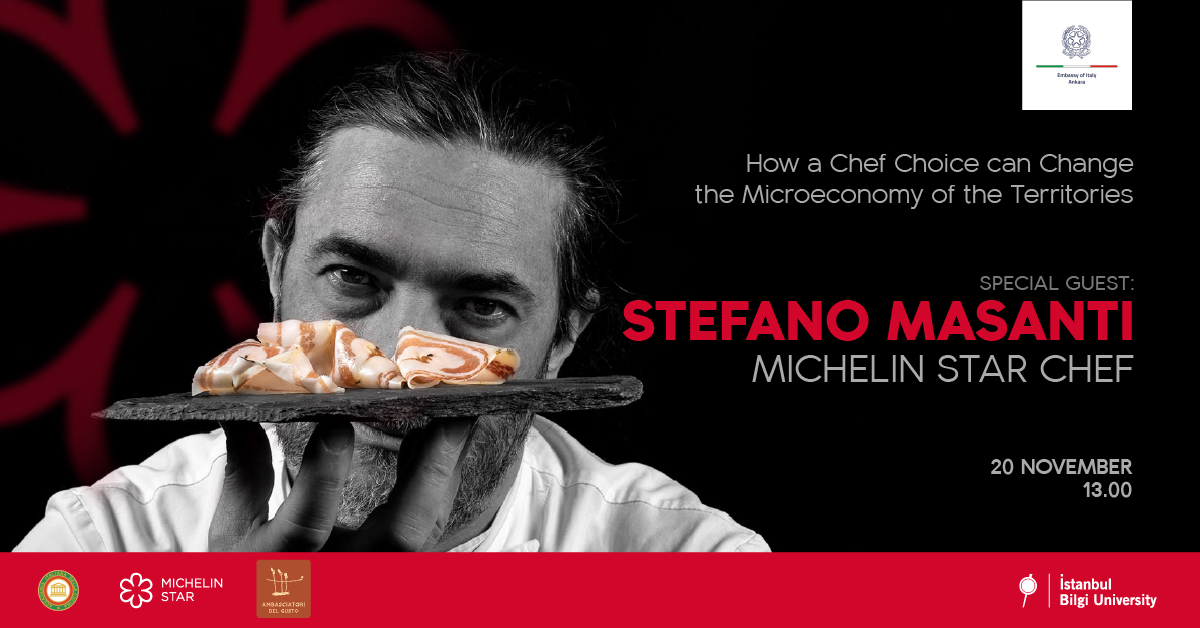 Stefano Masanti, the world-famous and Michelin-star chef is at BİLGİ!
The event, organized with the support of Accademia Italiana della Cucina, Istanbul Delegation and Embassy of Italy, Ankara will be online. Click here to join.

About Chef: Michelin-star chef Stefano Masanti is the founder of one of northern Italy’s most highly rated restaurants, Il Cantinone. Stefano is the Executive Chef and co-runs the restaurant with his wife Raffaella, a professional sommelier. The restaurant is located in the small ski-village of Madesimo, in the Italian Alps. Stefano and Raffaella spend their off-season at V. Sattui Winery in Napa Valley, California, working mostly on group events and weddings, while also overseeing the in-house Salumeria.

Born in Milan in 1970, Stefano Masanti grew up in the Lombardian resort town of Madesimo, helping the family business, Hotel Andossi. He received his B.A. degree in hospitality at the Hotel Institute Crotto Caurga Chiavenna, followed by three years at the University of Milan, where he majored in public relations. Additional professional development includes time in France’s Ecole Lenotre, Alain Ducasse’s culinary school, Ducasse Education, and the culinary institute in Brescia, Italy.

Chef Masanti is a member of the International Association of Culinary Professionals; he has helped launch a number of restaurants and hotels in Poland. An accomplished master of charcuterie, Masanti was named “Craftsman of the Year” in all of Italy by the 2009 Identità Golose for best Valchiavenna bresaola. Moreover, Chef Masanti’s Bresaola was just awarded in 2019 “Best Bresaola” in Italy. From 2008 to 2013 he is Vice President of Sondrio Chamber of commerce competent for tourism.

One of the earliest proponents of the Slow Food movement, Chef Masanti believes in the value of preserving and protecting regional food traditions from around the world.