Domino Lectures: Digital Monopoly Platforms and Public Wealth: from public innovation to monopoly (and back again?) 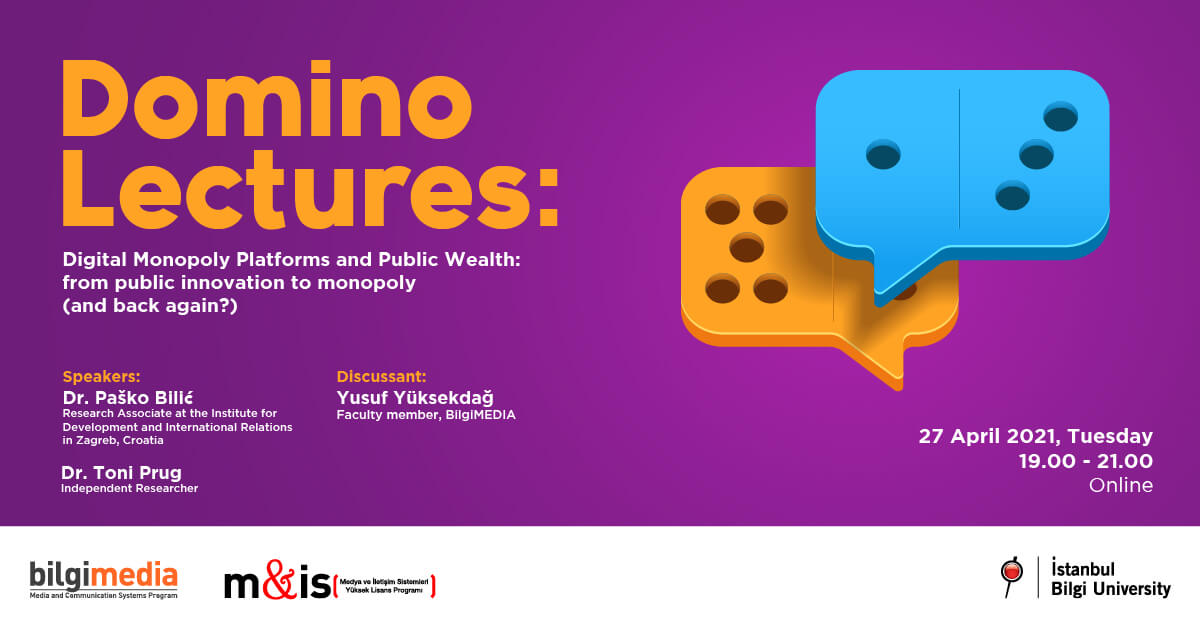 Reports, debates and calls for challenging monopolies of tech giants such as Google, Amazon, Apple, and Microsoft (GAFAM) are common in business and daily press. Outrage over socially damaging practices of GAFAM is found across the public sphere. These regular signs of dissatisfaction put the political system on notice and create a sense of urgency for political action in the form of regulatory and policy responses.

In this presentation, we start from a seemingly obvious research question: how come that the Western countries, despite the competitive character of their economies, have the domination of a single company for a such a socially and economically important functions such as web searching, social networking and online retailing?

An answer cannot be given by looking at our present situation alone, nor can it be brushed aside with techno-determinist notions of autonomous logic of networked technologies. Instead, we observe the monopolization processes from a historical and political economy perspective, discussing it as part of the capitalist mode of production with some unique characteristics. A historical perspective allows us to trace how dominant digital platforms are established and what the underlying dynamic between public innovation and commercial capture in that process was. Such an approach also provides us with a set of theoretical insights contributing to thinking about plausible alternatives. Specifically, what are the limits of policy and regulation driven changes to reduce the current dominance of capitalist monopoly platforms?

In the process, we will enhance the visibility of inherent contradictions of contemporary capitalism obfuscated by analytical frameworks that normalize and naturalize its presence as the only possible social form of production and circulation of products.

Dr. Paško Bilić – Research Associate at the Institute for Development and International Relations in Zagreb, Croatia

Dr Paško Bilić is Research Associate at the Institute for Development and International Relations in Zagreb, Croatia. Previously, he was International Visiting Research Fellow at the Institute for Advanced Studies, University of Westminster (London, UK), as well as Doctoral Research Fellow at the University of Alberta (Edmonton, Canada). He published in journals such as Internet Histories, Javnost (The Public), Political Economy of Communication, triple C: Communication, Capitalism & Critique, New Media & Society, European Journal of Communication, Big Data & Society, and Interactions: Studies in Communication and Culture. He is the author (with Toni Prug and Mislav Žitko) of The Political Economy of Digital Monopolies: Contradictions and Alternatives to Data Commodification (forthcoming with Bristol University Press, 2021); Sociology of Media: Routines, Technology, and Power (Jesenski i Turk, 2020 – in Croatian) and main editor (with Jaka Primorac and Bjarki Valtysson) of Technologies of Labour and the Politics of Contradiction (Palgrave Macmillan, 2018).

Dr Toni Prug is an independent researcher based in Zagreb, Croatia. Previously, he was Teaching Assistant School of Business and Management, Queen Mary (University of London), where he also obtained his PhD on non-market and egalitarian production in 2014. He is the author (with Paško Bilić and Mislav Žitko) of The Political Economy of Digital Monopolies: Contradictions and Alternatives to Data Commodification (Bristol University Press, 2021). He was the lead researcher (with T. Buble and M. Kikaš) of Mapping Left Actors: Croatia (Rosa Luxemburg Stiftung Southeast Europe, 2018). He has been presenting regularly at heterodox economics conferences for over a decade. He appeared as a guest lecturer at the University of Zagreb, Zadar and Rijeka, faculties of Economics, Political Science, Sociology and Cultural Studies. He has ten years of experience as a software and networks engineer in London, UK, producing both proprietary software and releasing Free and Open Source software.