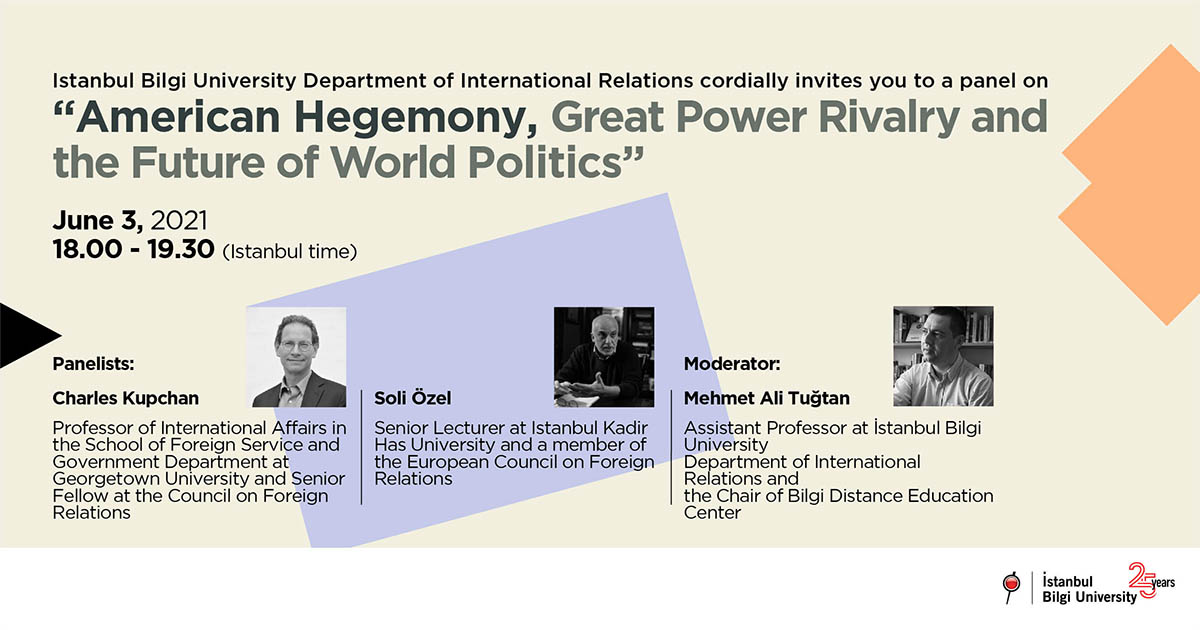 Istanbul Bilgi University Department of International Relations cordially invites you to a panel on “American Hegemony, Great Power Rivalry and the Future of World Politics”

Charles Kupchan, Professor of International Affairs in the School of Foreign Service and Government Department at Georgetown University, Senior Fellow at the Council on Foreign Relations

Soli Özel, Senior Lecturer at Istanbul Kadir Has University, a member of the European Council on Foreign Relations

Charles A. Kupchan is Professor of International Affairs in the School of Foreign Service and Government Department at Georgetown University, and Senior Fellow at the Council on Foreign Relations.  From 2014 to 2017, Kupchan served as Special Assistant to the President and Senior Director for European Affairs on the National Security Council in the Obama White House. He was also Director for European Affairs on the National Security Council during the first Clinton administration. His most recent books are Isolationism: A History of America’s Efforts to Shield Itself from the World (2020), No One’s World: The West, the Rising Rest, and the Coming Global Turn (2012), and How Enemies Become Friends: The Sources of Stable Peace (2010).

Soli Özel holds a BA in Economics from Bennington College (1981) and an MA in International Relations from Johns Hopkins University School of Advanced International Studies (SAIS-1983). He is currently a senior lecturer at Istanbul Kadir Has University. In the year of the pandemic he is also teaching a course at the American University in Central Asia (AUCA) and at the Menton campus of Sciences-Po. He was a Bernstein Fellow at the Schell Center for Human Rights at Yale Law School and a visiting lecturer in the Political Science Department of Yale. He has been a columnist at Nokta magazine and GazetePazar, Yeni Binyıl, Habertürk, and Sabah newspapers. Currently he writes for T24, DuvarEnglish and Yetkin Report as well as the blog of Institut Montaigne. He held fellowships at Oxford, the EU Institute of Strategic Studies and was a Fisher Family Fellow of the ‘Future of Diplomacy Program’ at the Belfer Center of the Kennedy School of Government at Harvard University. He taught at SAIS, University of Washington, Northwestern University, and Hebrew University. He was a Richard von Weizsacker fellow at the Robert Bosch Academy in Berlin between 2015-2017 and a visiting fellow at Institut Montaigne in Paris in 2018. Most recently he wrote: The foreword to an edited work After the Revolution: A Decade of Tunisian and North African Politics, A Monograph of ResetDOC. ‘US-Turkey Relations since WWII: From Alliance to Transactionalism’, co-authored with Serhat Güvenç will be published in The Oxford Handbook of Turkish Politics. ‘The Economics of Turkey-Russia relations’ co-authored with Gökçe Uçar was published by EDAM in 2019. Other recent works include ‘How the Syrian Civil War shifted the balance of power in Turkish-Israeli relations’, co-authored with Selin Nasi, ‘The Transatlantic Drift and the Waning of Turkey’s 'Strategic Westernness’ for Heinrich Böll Stiftung, co-authored ‘POLITICS OF POPULISM: POWER AND PROTEST IN THE GLOBAL AGE’ with Evren Balta, The Crisis in Turkish-Russian Relations, “The Kurds in the Middle East” with Arzu Yılmaz, in SIPRI Yearbook 2017. He is a member of the European Council on Foreign Relations.

Assistant Prof. Mehmet Ali Tuğtan has been a member of İstanbul Bilgi University Department of International Relations since 2008. Mehmet Ali Tuğtan has been the Chair of Bilgi Distance Education Center (UZEM) since August 2017. Majored in international relations and political science in Marmara University, Mehmet Ali Tuğtan has completed his MA in 2000 with his thesis titled Emergence of A Post Cold War European Security Architecture and his PhD in 2007 with the dissertation titled Turkish-US Security Relations 1945-2003: A Game-Theoretical Analysis of the Institutional Effect in Political Science program at Boğaziçi University. Dr. Tugtan’s areas of study include Turkish-American Relations, Contemporary World Politics, and Security Studies. In addition to several book chapters and articles on these subjects, Dr. Tugtan has edited a book on the Turkish involvement in the Korean War (Kore Savaşı: Uzak Savaşın Askerleri) published in 2013. For Massive online open course projects of Dr Tugtan on his areas of study, see: EdX Contemporary Issues in World Politics (With Prof. Ilter Turan), https://www.edx.org/course/con... , FlipEU: A Flipped Course on EU (With Ast. Prof. Özge Onursal Beşgül),https://flipeu.bilgi.edu.tr/