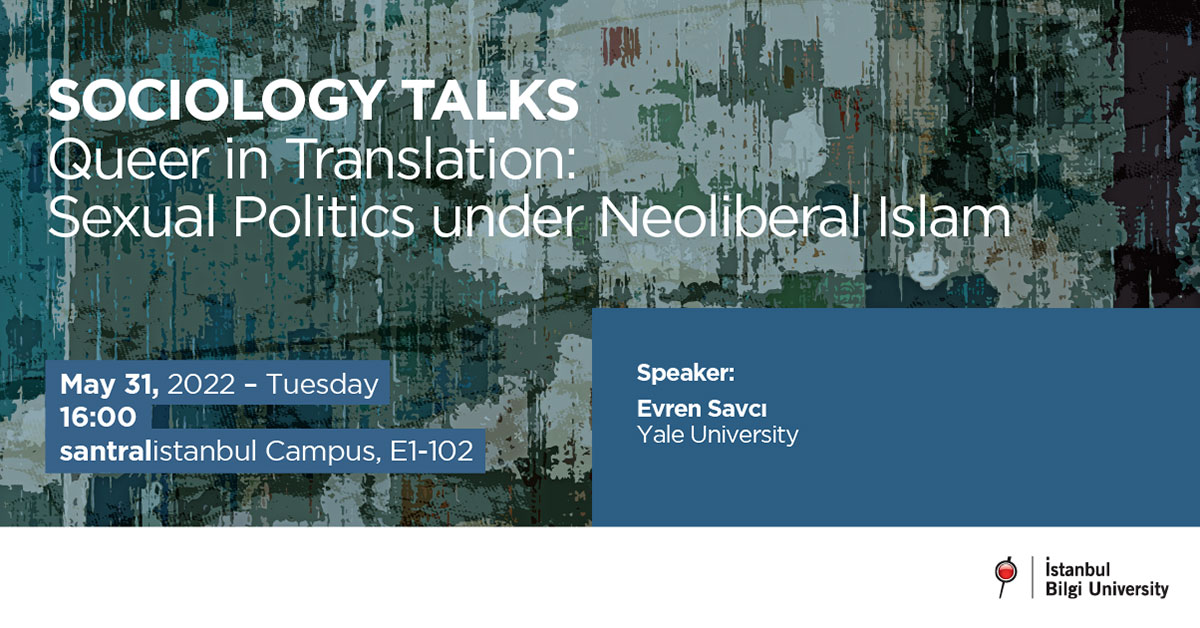 In this talk, Evren Savcı will speak about her book Queer in Translation: Sexual Politics under Neoliberal Islam (DUP 2021), which intervenes in queer studies’ separate, and in fact diagonally opposing approaches to neoliberalism and Islam by using the case of Turkey’s AKP governments for the past 16 years. She theorizes ‘neoliberal Islam’ as a unique regime that brings together economic and religious moralities that work to deploy marginality onto ever expanding populations instead of concentrating it in the lower echelons of society. Taking queer studies’ disparate treatments of neoliberalism and Islam as a symptom of the field’s homolingual address, Savcı turns to translation as a queer methodology to think Islam and neoliberalism together and to evade the limiting binaries of traditional/modern, authentic/colonial, global/local, and East/West—thereby opening up ways of understanding the social movements and political discourses that coalesce around sexual liberation in ways that do justice to complexities of both what circulates under the signifier Islam and of sexual political movements in Muslim-majority countries.

Evren Savcı is Assistant Professor of Women’s, Gender and Sexuality Studies at Yale University. Her first book Queer in Translation: Sexual Politics under Neoliberal Islam (2021, DUP) analyzes sexual politics under contemporary Turkey’s AKP regime with an eye to the travel and translation of sexual political vocabulary. Her second book project turns to the political economy of monogamy. In it, she discusses the establishment of it as a central tenet of civilized sexual morality, and attends to the current neoliberal incorporation of its alternatives and restoration of its distributive logic. Savcı’s work on the intersections of language, knowledge, sexual politics, neoliberalism and religion has appeared in Journal of Marriage and the Family, Ethnography, Sexualities, Political Power and Social Theory, Theory & Event, Journal of Feminist Studies in Religion and GLQ, and in several edited collections. Savcı received her Ph.D. in Sociology from University of Southern California, and her master’s and bachelor’s degrees in Sociology from University of Virginia. Following her Ph.D., she was a postdoctoral fellow at The Sexualities Project at Northwestern (SPAN).