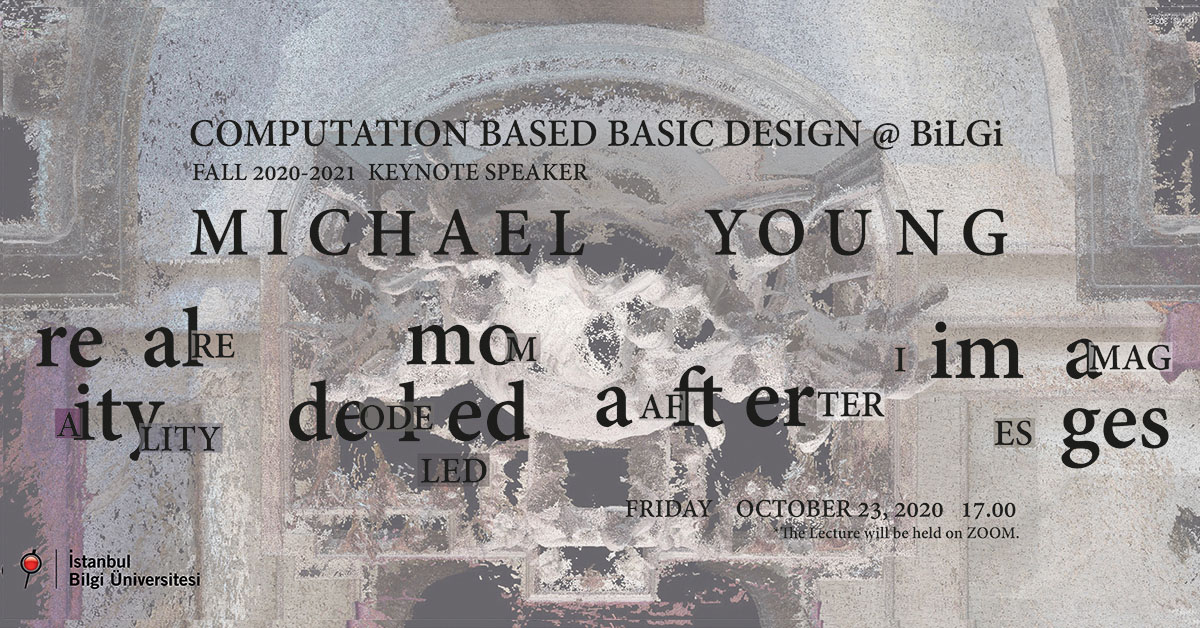 ComputationBased_BasicDesign Studio at the Faculty of Architecture hosts Assistant Professor Michael Young from Cooper Union, Irwin S. Chanin School of Architecture as a keynote speaker of the 2020-2021 Fall Semester. Michael Young will give an online lecture titled “Reality Modeled After Images” via Zoom.

The lecture will be virtually held on Zoom. Click the link*  in the specified time. The lecture is limited to 300 attendees.

Representation will be held in English without translation.


About the Lecture: “Reality Modeled After Images”

Changes in architectural representation are often attributed to the ever-accelerating modernization of media, whereby new technologies challenge conventions and redraw disciplinary boundaries. This position is found in many current arguments that posit computation as a paradigmatic revolution. But the situation is not that simple and can also work the other way around: established conventions domesticate new media technologies toward disciplinary practices, continuing the biases of the past through different means and mediums. This phenomenon operates in arguments that describe a computer as just a tool that may be faster, more precise, and more efficient but is not essentially different from earlier tools and techniques.

Implicit in both arguments is that technology is neutral, and the primary concern is to learn how to use it properly. But technology is never neutral, for it is itself the result of a constantly shifting assemblage of people, machines, ideologies, and conventions. A transformation within architectural representation occurs not only with the appearance of new tools and techniques but also when conventions become devalued and revalued. The images that architecture produces are not only used to define disciplinary expertise but play a fundamental role in how the built environment will appear, how it will be interpreted, and who’s values will be privileged. These are discursive questions about how the discipline understands and uses the images it creates, and how these in turn alter relationships between people and environments. Mediations participate in the “formation of worlds.” What is critical is not necessarily to dismantle, dissect, and dissolve digital media but to understand how they arrange, associate, and dissociate relations that increasingly constitute the background of reality. And how at a fundamental level, this is an issue of aesthetics.

Michael Young is an architect and educator practicing in New York City where he is a founding partner of the architectural design studio Young & Ayata. A book length manifesto titled "The Estranged Object: Realism in Art and Architecture", written by Michael was published in the Spring of 2015 by the Graham Foundation. Michael has taught design studios and seminars at Yale, Princeton, Columbia, Syracuse, Pratt, and Innsbruck University. In addition to practice and teaching, Michael is invested in writing and research in relation to the confluence of geometry, representation, and aesthetics. Michael earned his MArch II degree from Princeton University and his BArch from Cal Poly San Luis Obispo.

Dial by your location