Prof. Ayhan Kaya has been awarded an “Advanced Grant” by the European Research Council (ERC). 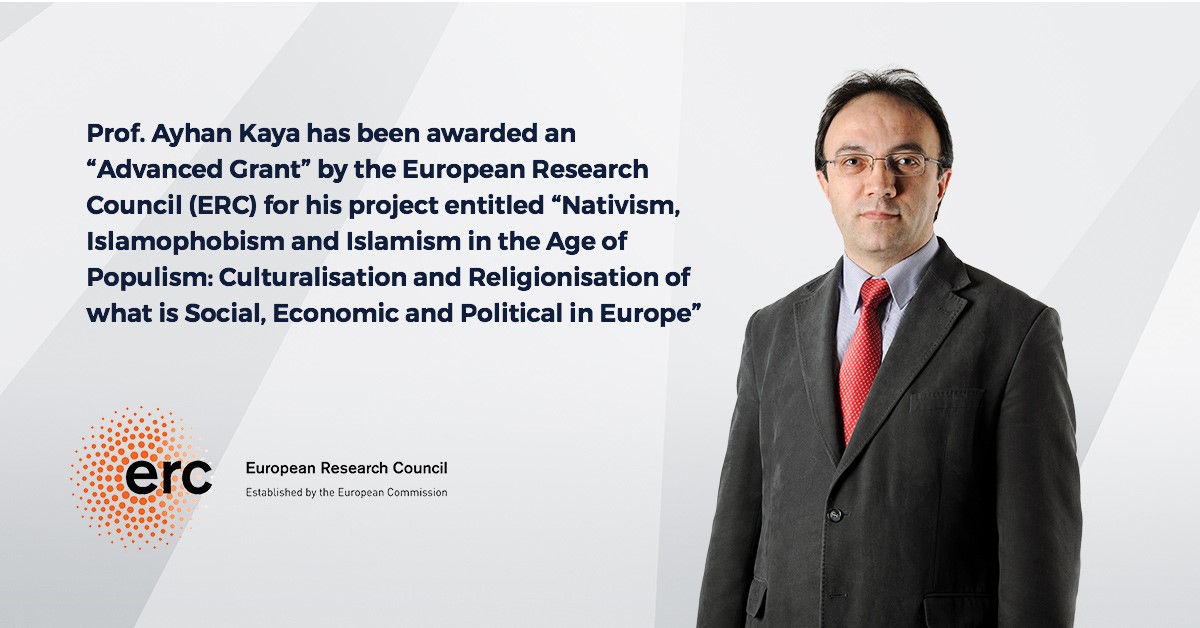 Prof. Ayhan Kaya, faculty member of our university’s International Relations Department and Director of the European Union Institute has been awarded an “Advanced Grant” by the European Research Council (ERC), one of the most prestigious research institutions of Europe, for his project entitled “Nativism, Islamophobism and Islamism in the Age of Populism: Culturalisation and Religionisation of what is Social, Economic and Political in Europe”.

For the purpose of more fairly evaluating research work at different levels, ERC offers three types of grants: A “Starting Grant” for young researchers, a “Consolidator Grant” for experienced researchers, and an “Advanced Grant” for scientists who perform high-level research at a global level. Prof. Ayhan Kaya’s project is the first social sciences project at a Turkish university to receive an “Advanced Grant” from ERC.

Prof. Kaya’s Research Summary:
The main research question of the study is: How and why do some European citizens generate a populist and Islamophobist discourse to express their discontent with the current social, economic and political state of their national and European contexts, while some members of migrant-origin communities with Muslim background generate an essentialist and radical form of Islamist discourse within the same societies? The main premise of this study is that various segments of the European public (radicalizing young members of both native populations and migrant-origin populations with Muslim background), who have been alienated and swept away by the flows of globalization such as deindustrialization, mobility, migration, tourism, social-economic inequalities, international trade, and robotic production, are more inclined to respectively adopt two mainstream political discourses: Islamophobism (for native populations) and Islamism (for Muslim-migrant-origin populations). Both discourses have become pivotal along with the rise of the civilizational rhetoric since the early 1990s. On the one hand, the neo-liberal age seems to be leading to the nativisation of radicalism among some groups of host populations while, on the other hand, it is leading to the islamization of radicalism among some segments of deprived migrant-origin populations. The common denominator of these groups is that they are both downwardly mobile and inclined towards radicalization. Hence, this project aims to scrutinize social, economic, political and psychological sources of the processes of radicalization among native European youth and Muslim-origin youth with migration background, who are both inclined to express their discontent through ethnicity, culture, religion, heritage, homogeneity, authenticity, past, gender and patriarchy. The field research will comprise four migrant receiving countries: Germany, France, Belgium, and the Netherlands, and two migrant sending countries: Turkey and Morocco.

For detailed information about all funded projects, please click here.