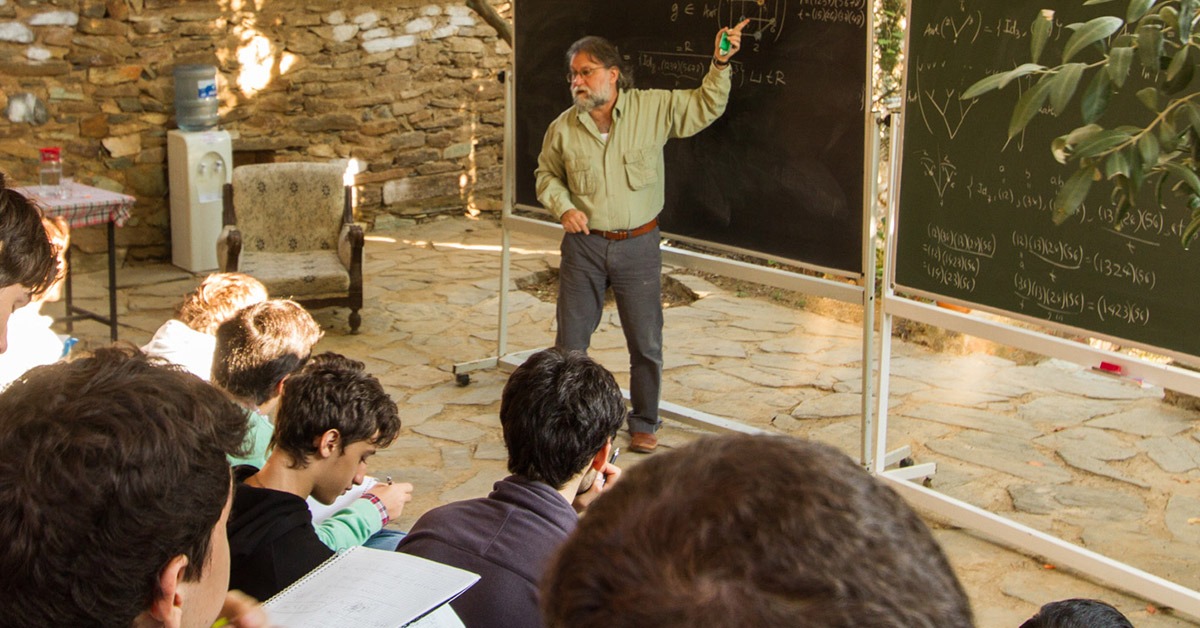 The International Mathematical Union has awarded its 2018 Leelavati Prize for “outstanding contributions for increasing public awareness of mathematics as an intellectual discipline and the crucial role it plays in diverse human endeavors" to Prof. Ali Nesin, head of Department of Mathematics  of our University. The award is announced on August 1, 2018 at the award ceremony of the opening of International Congress of Mathematicians, in Rio de Janerio, Brasil.

The Leelavati Award is named after the 12th-century mathematical treatise "Lilavati" devoted to arithmetic and algebra written by the Indian mathematician Bhāskara II.

Ali Nesin rewarded with this Prize “for his outstanding contributions towards increasing public awareness of mathematics in Turkey, in particular for his tireless work in creating the "Mathematical Village" as an exceptional, peaceful place for education, research and the exploration of mathematics for anyone.

"I am delighted to hear that, but I am not surprised; in my life, I taught mathematics in four different countries, and I can confidently say that Ali Nesin's work in mathematics education and in promotion of mathematics is indeed unprecedented on a global scale. I was privileged to witness development of Ali's educational work in Turkey over almost 20 years. Everything started when he interrupted his successful academic career in America and returned to Turkey to take care of the Nesin Foundation and the Orphan-age established by his father. I had a chance to visit the Orphanage and I am convinced that Ali's now world famous Mathematics Village would not be possible without his prior experience at the Orphanage where he honed his brilliant formula of giving neglected and destitute children safety-independence-responsibility, which he later turned into the guiding principles of his model of mathematics education: empowerment-independence-rigour.

Ali's approach to mathematics is deeply humanistic; I think he helps children to become not only better mathematicians, but also better human beings. In life,

Ali's work is an example for the whole world. He is helped by hundreds of people in your country: by his students, by volunteers who teach and help to run the Village, by staff of the Nesin Foundation and the Village, by sponsors. Quite deservingly, Turkey is the first beneficiary of his ideas and his work."

“I am very pleased to learn that the brilliant Turkish mathematician Ali Nesin has received the 2018 Leelavati Prize, the highest honor for mathematical outreach, for his work in raising the level of awareness of, appreciation for, and understanding of, modern mathematics and mathematical education as a force for the development of his native Turkey. His initiatives in publishing, exposition, curricular design, and educational innovation have inspired a generation of Turkish mathematicians and lovers of mathematics, and can serve as a model internationally. He combines a deep understanding of mathematics with a gift for communication, enormous creative energy, and a fervent commitment to the highest values of Turkish culture and society.”

“ For as long as I knew Ali Nesin I have admired his intellectual prowess and his academic and human achievements. Therefore, I am deeply moved by the news that such qualities have been crowned by the world community of mathematics awarding him the 2018 Leelavati Prize.

I knew Ali as a Ph. D. student at Yale University in the early 1980’s, and have since been acquainted with his brilliant teaching and research career at some of the best USA universities. It was, then, a surprise to learn, in the late 1990’s, of his bold decision to return to his native Turkey to pursue the work of his deceased father for the education and social enhancement of destitute children –the Nesin Foundation-- while, at the same time, continuing his intellectual and  academic commitments, by :

Already in the new century Ali surprised again friends and colleagues –not to mention the international mathematical community-- by creating the Nesin Mathematics Village at Şirince. Aided by a group of students, colleagues and friends, he built it ex-nihilo with his own hands, literally and figuratively. The Village has impressively expanded during its decade of existence ; it runs on a very modest budget, thanks to the volunteer work of students and teachers, and the support of some donors ; fees are voluntary, to some extent.

The conception, genesis, history and remarkable success of the Village have been amply described in many press articles, amongst others through the media of the world mathematical profession (the « Mathematical Intelligencer », «Notices of the American Mathematical Society », etc.) ; it needs not be summarized here.

In-depth analysis, and the personal experience of students, collaborators and teachers, including myself, show beyond doubt that the Village is not only a highly original initiative contributing to the appreciation of mathematics by the Turkish society and, especially, its youth, but also a path-breaking experiment for the education and the enhancement of new generations, well beyond the world of mathematics. The Nesin Mathematics Village, Ali’s exceptional creation, ought, in my opinion, be celebrated by Turkey as an invaluable achievement of the whole nation.”