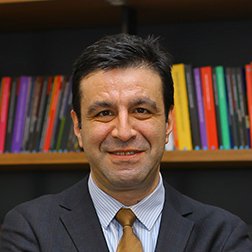 Prof. M. N. Alpaslan Parlakçı officiates as a member of Board of Trustees and Acting Rector of İstanbul Bilgi University.

Prof. M. Remzi Sanver officiates as the Vice President of the Board of Trustees of İstanbul Bilgi University and Research Director in France National Center for Scientific Researches (CNRS).

Prior to these, Prof. Sanver has officiated as Rector and Academic Fellow in İstanbul Bilgi University. His scientific researches on application of mathematics on social sciences has been published in prominent scientific journals, and his works has been cited for approximately 1,000 times and has leaded to more than 70 scientific articles. He also makes editorial works in prominent international scientific publication organs in their field.

After graduating from Galatasaray High School, Prof. Sanver has been graduated from Department of Industrial Engineering of Boğaziçi University.He has completed his doctoral studies in Economics Department of the same university. He speaks English, French and Spanish.

Lale Cander officiates as a Member of the Board of Trustees of İstanbul Bilgi University.

Cander currently holds office as Chairperson of the Board of TP Endüstriyel ve Ticari Lastikler Company; and continues to provide consultancy services for major companies such as Finmeccanica, Gemmo and Pirelli. She is specialized in Corporate Law and Foreign Investments Law. Prior to these, she has worked as lawyer of the Ministry of Foreign Affairs of the USA for new consulate building construction. She also represents companies Iveco S.p.A., AgustaWestland S.p.A, Top Leasing GmbH.

Kerim Paker officiates as a Member of the Board of Trustees of İstanbul Bilgi University.

Kerim Paker received his engineering degree and graduated from Rochester University in 1993. He started his professional career in the in-house consultancy department of a chemistry company based in Philadelphia, USA. While he was pursuing his Master`s Degree at Carnegie Mellon University, he continued to be a part of the company`s re-structuring projects on a part-time basis. In 1997 he graduated from Carnegie Mellon University with a Master`s degree in Business Administration.

In addition to consultancy services, Paker also became both the partner and Turkey director of an Internet company with a foreign partner. Kerim Paker who has been the Vice Managing Director of Yeni Tekstil A.Ş. which is a family business since August 2003 also has been a partner and Managing Director at KRM Management Consultancy Inc. (KRM Yönetim Danışmanlık A.Ş.) in HR industry since April 2006.

He has instructed in Istanbul Bilgi University, between the years 1998-2016 on a part time basis, to both the undergraduate and graduate degree students, in the subject of the Strategic Management.

He is a member of the board of trustees at Civil Society Support Foundation (Sivil Toplum Destek Vakfı) and Podem Public Policy and Democracy Studies Center.

Pharmacist Ahmet Selim Köroğlu officiates as a member of the Board of Trustees of İstanbul Bilgi University.

Köroğlu currently holds office as Senior Counsellor of President of the Republic since 2015.

Köroğlu has been graduated from Istanbul University Faculty of Pharmacy in 1992, and engaged in political activities and worked as pharmacist between 1994 and 2015. He is currently performing studies on "Health Insurance System in Turkey" and "Humanitarian Aids in crisis periods" issues.

A.Yılmaz Yıldız, officiates as a Member of the Board of Trustees of İstanbul Bilgi University.

A. Yılmaz Yıldız is the CEO and Board Member of Zurich Insurance Group in Turkey. Yıldız started his career at Turkish Prime Ministry, Undersecreteriat of Treasury working for State Incentives and World Bank Projects Department on health, education and technology projects. He moved to Bain&Co as a strategy consultant focusing on growth, innovation and restructuring projects in Europe, Middle East and Asia. He then worked for GE-Consumer Finance co-owned Garanti Bank and Garanti Insurance as SVP responsible for sales, marketing and customer services. At Garanti he managed internet, telephone, mobile banking, credit cards, retail and SME customer services & direct distribution/sales for 6 million customers.

In 2007, he became the Founding CEO of BNP Paribas Group’s insurance subsidiary, CARDIF in Turkey, setting up as green-field the life and non-life insurance businesses. He moved to become the CEO of Groupama Insurance and Groupama Life & Pension companies before taking over as the CEO of Zurich Insurance Group in Turkey in 2012.

Yılmaz graduated with distinction from Boston University with dual degrees in Economics and Management, was a visiting scholar at Heidelberg University in Germany and holds an MBA degree from Harvard University, Harvard Business School.

He teaches entrepreneurship and innovation at İstanbul Bilgi University. He is an active member and investor of the leading angel investor network Galata Business Angels, and an independent jury member for BNP Paribas-TEB and TÜSİAD entrepreneurship awards. He is an active supporter of Istanbul Culture & Arts Foundation(İKSV) and serves at the Board of Harvard Business School Alumni Club, Swiss Chamber of Commerce and Foreign Economic Relations Board(DEİK) for Israel and Switzerland Business Councils.

Yeşer Dilan Tekdağ Sevik serves as a Member of the Board of Trustees of İstanbul Bilgi University.

Upon graduation from the Faculty of Law, İstanbul Bilgi University, Tekdağ Sevik received graduate degree from the Department of International Commerce of Brunel University in the UK.

Starting her career as a legal practitioner in a law firm in London, Tekdağ Sevik still continues to work as lawyer for a publishing holding company. She is an expert in the fields of media and business law. Tekdağ Sevik is married with one child.

Serving as the Chairman of the Board of Can Holding, Kemal Can is also the chairman of the board and member of various holding companies engaged in the fields of energy, retail operations, tourism, food, health, construction and finance.

Canan Can serves as a Member of the Board of Trustees of İstanbul Bilgi University.

She completed her higher education in foreign trade. She assumes duty of board membership in many companies operating under Can Holding in such fields as energy, retail, tourism, food, healthcare, construction and finance.

She also works actively in many non-governmental organizations and business associations.

Serving as the President of Energy Group of Can Holding, Mehmet Can is also the chairman of the board and member of various holding companies engaged in the fields of energy, retail operations, tourism, food, health, construction and finance.

Prof. M. Ege Yazgan’s acquaintance to İstanbul Bilgi University started in 2000 and continues his duties as the Director of Center for Financial Studies and as a faculty member in the Department of Economics.

Prof. Yazgan, prior to these he has held office as Acting Rector, Vice Rector, Dean, Deputy Dean and Program Director in İstanbul Bilgi University. He has worked as Director of Turkey Studies Center in Kadir Has University.

He has many academic articles published in land and abroad. He has worked as guest researcher in Cambridge University and as academic member in Sussex University; he has started his academic career as research fellow in İstanbul Bilgi University Department of Economics.