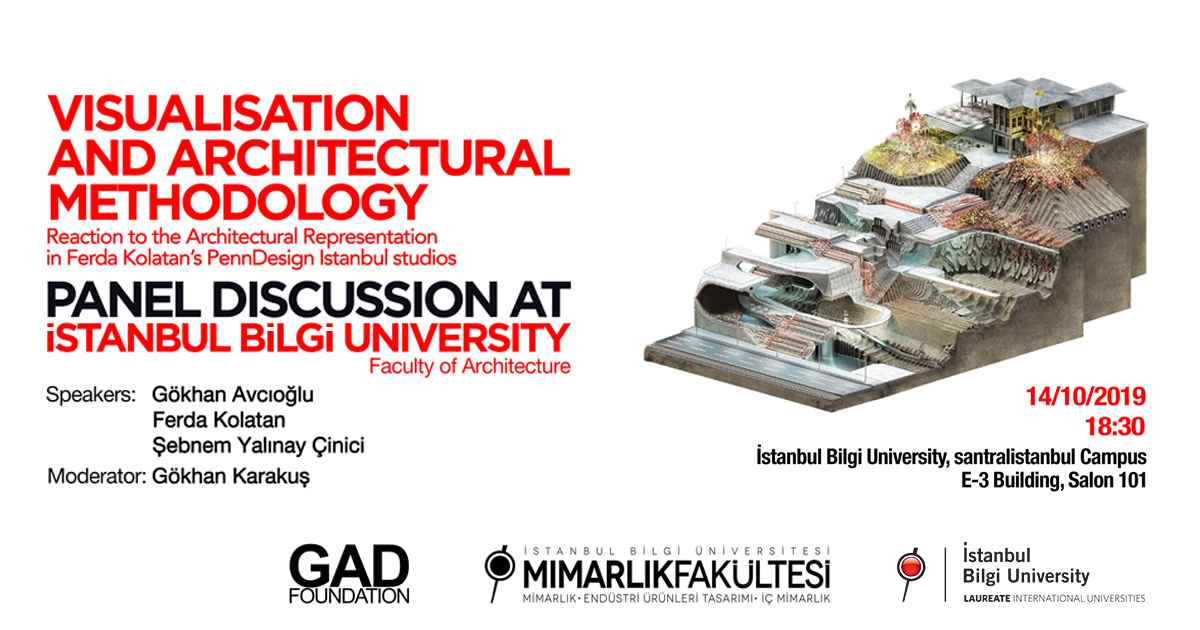 But we can also clearly see that this issue has never been as contentious as it is today. Today with the assistance of computers and computational design we have a plethora of embellished, faux-realistic depictions of unbuilt structures saturating architectural publishing, online media in particular, accompanying everything from press releases to critical texts. Intriguingly as a counter movement and reaction, many architects are turning to analog drawing and modernist collage visualistation techniques to counter balance the undue influence of computers.  There has also been the reverse interest of highly informational diagrammatic representation relying on data and information design and graphics.

Other perspectives have tried to subsume visualization more completely into a  thorough architectural methodology existing between the image and the real or physical manifestation. This strategy can be seen in a series of Master Studios at PennDesign led by Ferda Kolatan who sought an architecture that according to him, “Rather than suggest(ing) specific solutions, we wanted to present prototypes that can be implemented at different scales”. Removing the issue of scale and focusing on the hybridized objects Kolatan’s studios utilized a unique visual representational language to flesh out this architecture.

This panel discussion between Ferda Kolatan, Gökhan Avcıoğlu, Şebnem Yalınay Çinici moderated by Gökhan Karakuş will seek to understand the role of the architectural image in architectural discourse. They will discuss parameters and scenarious in the era of Instagram and online architecture media ruled by  hyperreal pictorial renders generated by architectural visualizers.

Different approaches represented by architects in Istanbul including the visualization/diagrammatic hybrid employed by Gökhan Avcıoğlu of GAD, the computational design approach of Şebnem Yalınay Çinici  will be at center of discussion moderated by Gökhan Karakuş.

*Representation will be held in English without translation.

Ferda Kolatan Ferda Kolatan is the Founding Director of su11 and an Associate Professor of Practice at the University of Pennslyvania. He received his Architectural Diploma (Dipl.Ing) from the RWTH Aachen and his Masters in Architecture (MSAAD) from Columbia University where he was the recipient of the LSL Memorial Prize and the Honor Award for Excellence in Design. Ferda has lectured widely and taught design, fabrication, and theory courses at institutions such as Columbia University, SCI-Arc, Pratt Institute, RWTH Aachen, Rensselaer Polytechnic Institute, Washington University, CCA, UCAM, University of British Columbia, and Cornell University. He is also a co-author of the book Meander: Variegating Architecture (Bentley Press, 2011) and was selected as a Young Society Leader by the American Turkish Society in 2011.

Gökhan Avcıoğlu Gökhan Avcıoğlu completed his education in KSU/BA in Architecture. He is the principal and founder of GAD in Istanbul, established in 1994. Among his projects are office buildings, public spaces, commercial spaces and residences in Istanbul, Bodrum, New Jersey, Washington DC, Virginia and Connecticut. Among his most recent award winning projects are Media City, AKH KNDU Villas, KUUM Hotel and Residences, Pınar Logistics Centre, Fish Market and Trump Cadde.  A number of his projects have been short-listed for the Aga Khan Award for Architecture. He has been recognized by a number of different publications, including Wallpaper, Surface, City Magazine, NY Times, The New York Post, Transforming Cities - Urban Interventions in Public Cities, Archtekturfuehrer Istanbul, Monocle, Architectural Digest, Architectural Record, plus design books such as World Houses Now, Urban Houses and Cafes, Restaurants and Bars, Atlas of Contemporary Architecture. Mr. Avcıoğlu has been conducting studios and seminars at the Ecole Speciale d'Architecture in Paris, Yıldız Technical University and Istanbul Technical University. Gokhan Avcioglu is a member of AIA New York Chapter, Chamber of Architects Turkey.

Gökhan Karakuş Gökhan Karakuş is an Istanbul-based designer, curator, historian, architecture critic and theorist who focuses on the indigenous in modern architecture and design. He studied architectural history and theory at Columbia University and Vassar Collage in New York. He is the founder and director of Emedya Design, an interactive and environmental design studio that has completed a number of large scale wayfinding projects in Turkey that have been published internationally. He has taught design and architecture at Istanbul Technical University (1999-2014), Politecnico di Milano, and Bilgi University, Istanbul. Mr. Karakuş is a regular contributor to leading global architecture publications such as The Architect’s Journal, Architectural Record, Dwell, and Wallpaper; he was Editorial Director of Natura, Stone Architecture and Interiors from 2011-2015. He is also a curator of exhibitions on architecture and design such as Hyperarchaic Tectonics at the London Design Festival 2014, The Smooth and the Striated Digital Art by Architects at the Contemporary Istanbul Art Fair 2013 (focused on computational design as art) and most recently Atölye Maslak (2015) on Istanbul’s craft and maker community in the Maslak industrial district. He is reviewer and nominator for the Aga Khan Award for Architecture and The European Union Prize for Contemporary Architecture – Mies van der Rohe Award. He has been on the Advisory Board for the Turkish National Pavilion at the Venice Architecture Biennial (2014) and the Istanbul Design Biennial (2016).